The information below is taken from the Year R parent handbook, given to all families at induction and also available from the Geckos class page.

Phonics is a way of teaching children how to read and write. It helps children hear, identify and use different sounds that distinguish one word from another in the English language. Written language can be compared to a code, so knowing the sounds of individual letters and how those letters sound when they’re combined will help children decode words as they read. Understanding phonics will also help children know which letters to use when they are writing words.

Phonics involves matching the sounds of spoken English with individual letters or groups of letters. For example, the sound k can be spelled as c, k, ck or ch. Teaching children to blend the sounds of letters together helps them decode unfamiliar or unknown words by sounding them out. For example, when a child is taught the sounds for the letters t, p, a and s, they can start to build up the words: “tap”, “taps”, “pat”, “pats” and “sat”. 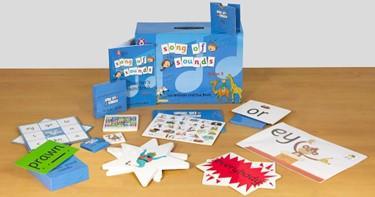 At Felbridge, we use a systematic phonics teaching programme called ‘Song of Sounds.’ Song of Sounds is a foundation for reading and writing. It teaches all of the letter sounds in an enjoyable and practical way and, like many other phonics programmes, is designed to support children to read and write words by blending and segmenting the taught sounds.

Song of Sounds- the song! 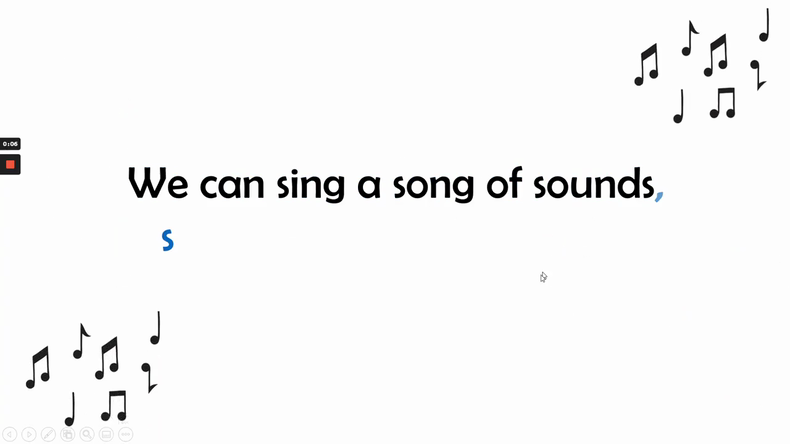 This is the Song of Sounds Stage 1 Song, so that you can sing along at home too!

How will my child learn the letter sounds?

At Felbridge Primary School, children in Year R will begin to learn all the letter sounds as soon as they start school. Each letter sound has an action and a song which will help your child to remember the letter that it represents. Children work through the initial sounds at a surprisingly fast rate; one letter sound will be taught each day, and as your child becomes more confident, they will find that the actions are no longer necessary.

The letter sounds will not be taught in the order of the alphabet; they have been chosen in groups of four letters at a time because they then enable a progression through the recognition of simple words, starting with three-letter ‘CVC’ (consonant-vowel-consonant) words such as c-a-t and t-a-p.

I’ve got an older child. Is Song of Sounds different?

If you’ve got an older child, don’t worry- reading hasn’t changed! We have adopted the programme as a way of engaging children even more with their early learning in phonics, but the books we send home and the approaches to sounding out words are broadly the same as those used to learn early reading skills by Key Stage 2 children before the introduction of Song of Sounds.

Our annual reading evening in September will support you to help your child when reading at home, so please don’t worry if this is new to you.

We teach the initial sounds in the order below, across 4 stages as part of our Song of Sounds programme. You can use this grid to help support your child by pointing at each sound and asking your child what it is. Their confidence and speed will progress much faster than you think, but try not to move them on faster than they are being taught the sound groups in school.

Stage 0 covers pre-school, encouraging children to listen to sounds around them and develop their sound knowledge.

Stage 1 is covered in Year R, starting with these sounds which will be taught in the order below:

The second phase of Stage 1 adds the following sounds and ‘digraphs/trigraphs’ – a combination of two or more letters that represents a single sound:

During Phases 3 and 4 of the Stage 1 phonics programme in Year R, we start to add ‘tricky words.’ These are words which cannot be ‘sounded out’ but instead will need to be learnt by having lots of practice. These words are introduced gradually as children become confident and secure in the basic sounds introduced earlier. Again, you can use the grid below to practise, but try not to rush ahead!

Children will move on to Stages 2 and 3 in school years 1 and 2, during which they will encounter more complex sounds and patterns and continue to build their phonetic knowledge to give them the skills they will need to write with increasing vocabulary in the upper year groups.

Unfortunately not the ones with chocolate chips.

Some cookies are necessary in order to make this website function correctly. These are set by default and whilst you can block or delete them by changing your browser settings, some functionality such as being able to log in to the website will not work if you do this. The necessary cookies set on this website are as follows:

Cookies that are not necessary to make the website work, but which enable additional functionality, can also be set. By default these cookies are disabled, but you can choose to enable them below: